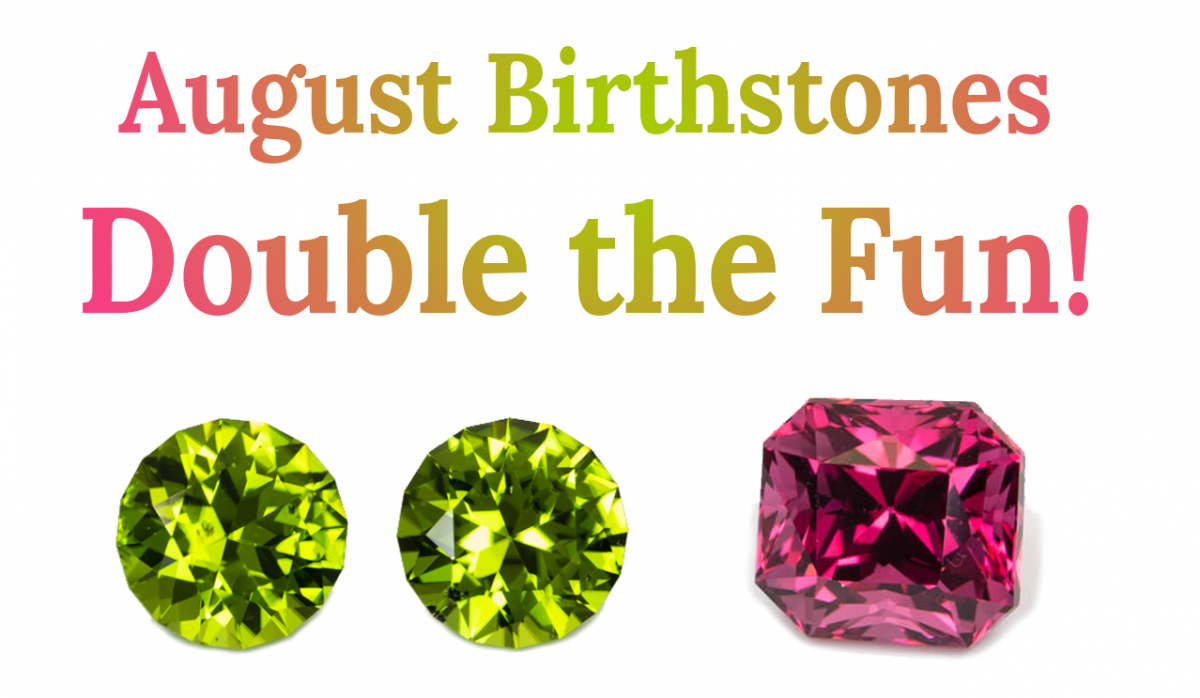 We’re lucky in August because it now has TWO birthstones: Peridot (the oldie) and Spinel (the new kid on the block!). We’re celebrating both this August.

Our favorite award-winning gemstone cutter, Roger Dery says, “I love Peridot because its color is almost impossible to replicate in any other gemstone – it holds a unique place in the green to yellow color family because isn't simply one or the other, but blends the two colors in a special way.”

We couldn’t agree more! The lovely warm, spring green doesn’t happen in any other gemstone.

Through history Peridot was believed to possess magical powers to dispel terrors and evil spirits. Historians actually believe that Cleopatra's famed Emeralds were Peridot! Egyptians called Peridot the "gem of the sun."

Perhaps its nickname comes from its usual source. Peridot is most often found wherever there is lava, meteorites, or volcanoes because it requires extreme heat and pressure to form. Peridot has been found in unique places including comet dust, pallasite meteorites, and more places deep in the earth's mantle. A gem hidden in earth’s most mysterious reactions!

Primary sources include Arizona, China, Ethiopia, Myanmar (formerly Burma), and Pakistan. The most desirable color for Peridot is an intense lime-green, though it may vary from yellow-green to olive-green. Usually we think of Peridot being very yellowish-green, but the past 10 years Pakistan has shown the world a Peridot with a blue hint or a vibrant green without a yellow modifier! Pakistan was not known to be a large source of Peridot until the coalition forces in the early 2000s were bombing the Taliban forces and opened up Peridot mines previously unfound.

Roger adds, “I love faceting Peridot because it truly comes alive with the right faceting technique. It’s a fun gem to cut because it does not have high hardness. It feels like you’re cutting through butter – a little bit like Tanzanite! A well-cut Peridot with the right design for the properties of Peridot and the right angles just comes alive. Peridot is a gem where precision faceting really makes a huge difference in the gem’s beauty.”

You can view our Peridot selection online here, or below are some gorgeous peridot loose gemstones, cut and faceted by Roger Dery:

The jewelry and gemstone world was thrilled with the addition of Spinel to the August birthstone category.  Spinel has long lived out of the limelight known only as a substitute for other gems but has recently been appreciated for its durability and wide range of colors. Many gems in crown jewels around the world are Spinels that were confused for Ruby and Sapphire. Separating Ruby from Red Spinel is said to be the birth of modern gemology.

Legends maintain that Spinel can reconcile differences, soothe sadness, and protect from harm.

Here are a handful of Roger Dery's spinel selections - from red, to pink, salmon and purple.

Sunday is Spouse's Day! We're open today until 5:30 and tomorrow until 1 if you'd like to pick up a quick "I love you" gift. <3 Also known as Military Spouse’s Day, Spouse’s Day is dedicated to recognizing spouses everywhere; from being thankful for fulfillment and security of a long-term relationship and to the boost to morale and well-being provided by spouses of those in the military.